The Miss America Organization Board of Directors announced today the election of Gretchen Carlson, Miss America 1989, as the organization’s new Chairman effective immediately.

Most previously serving Directors have resigned from the Board.  According to Dan Meyers, the interim Board Chairman, resignations from the Board were timed to ensure the organization had a continuing governance structure.  “It has been important to the Directors that incoming leadership be provided with what it needs to drive this American icon in a new direction.” said Meyers.

Incoming Chairman Gretchen Carlson thanked the Board of Directors for their personal and financial support to the organization over many years.  “Everyone has been stunned by the events of the last several days, and this has not been easy for anyone who loves this program. In the end, we all want a strong, relevant Miss America and we appreciate the existing board taking the steps necessary to quickly begin stabilizing the organization for the future.”  She added she wanted to personally thank Mr. Meyers for facilitating the transfer of the organization’s leadership.

Ms. Carlson further stated that she and the new Board would immediately work with all Miss America stakeholders, including the organization’s state executive directors and former state titleholders, to continue an ongoing inclusive and transparent process to identify additional new board members and management. She added that the new Board also looks forward to working with the organization’s many sponsors, seeking input while creating a viable, forward-looking Miss America Organization for this and future generations of young women. 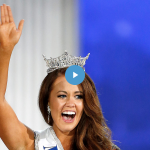 5 Things to Know About the New Miss America Cara Mund