Laila Ali is a world-class athlete, fitness & wellness expert, TV host, cooking enthusiast, founder of the Laila Ali Lifestyle Brand, and mother of two. The youngest daughter of late beloved global icon and humanitarian, Muhammad Ali, she is a three-time boxing hall of fame inductee and four-time undefeated boxing world champion, whose stellar record includes 24 wins (21 of which were “knockouts”) and zero losses. Laila is heralded as the most successful female in the history of women’s boxing. In 2012 when women’s boxing was included in the Olympics for the first time in history, Laila was the first woman in history to provide expert commentary for NBC Sports. Laila is the host of OWN Emmy award-winning series, “Home Made Simple” and the author of the best-selling cookbook, “Food For Life: Delicious & Healthy Comfort Food From My Table To Yours!”

Dubbed “The most powerful man in country music” by Forbes Magazine, Bobby Bones continues to be an unstoppable force. His nationally syndicated radio show, The Bobby Bones Show, broadcasts to more than 120 stations and is the #1 Country morning show with millions of listeners each week. The show recently garnered its third ACM Award for National On-Air Personality of the Year, also winning a 2017 Country Music Association award for National Broadcast Personality of the Year and earned Bones the title of youngest ever inductee into the prestigious National Radio Hall of Fame. With his undeniable knack for recognizing and supporting new talent, Bones brought his expertise to the latest season of ABC’s American Idol as mentor. Bones is also a touring stand-up comedian, philanthropist, a two-time #1 New York Times best-selling author and chart-topping comedy artist – a true “jack of all trades” (ESPN).

Jessie James Decker is a country music singer/songwriter, style entrepreneur, television personality and author. Her most recent album, Southern Girl City Lights, debuted as #1 on the iTunes Top Country Albums Chart and billboard hot 100 following the success of her gold-certified single “Wanted.”  A star of the hit reality show Eric and Jessie, she is the creator and designer of Kittenish, a playful fashion line inspired by her personal style. Decker’s first book, Just Jessie, is her guide to love, life, family and food, and will be released October 2 from Harper Collins Publishers.

Randy Jackson is a Grammy Award®-winning producer, musician, songwriter and record-industry executive, business entrepreneur, best-selling author, talent manager, television producer and beloved television personality.  Jackson has lent his talents to hit records by Smokey Robinson, Whitney Houston, Aretha Franklin and Madonna, to name a few.  He’s also lived in the rock ‘n’ roll world, recording and performing with legendary musicians such as Bob Dylan, Bruce Springsteen, ​Billy Joel, Bon Jovi, Keith Richards, Journey, Carlos Santana, Jerry Garcia, Bob Weir, and countless others. All in all, he has over 1,000 gold and platinum plaques to his name, with collective sales exceeding 200 million copies. However, it is on television where Randy Jackson became a household name and reached iconic status within pop culture as a judge on American Idol for 13 seasons.

Soledad O’Brien is an award-winning journalist, speaker, author and philanthropist who anchors and produces the Hearst Television political magazine program “Matter of Fact with Soledad O’Brien.” O’Brien, founder and CEO of Starfish Media Group also reports for HBO Real Sports, the PBS NewsHour, WebMD and has authored two books. She has appeared on networks, Fox and Oxygen and anchored and reported for NBC, MSNBC and CNN. She has won numerous awards, including three Emmys, the George Peabody award, an Alfred I DuPont prize and the Gracie. Newsweek Magazine named her one of the “15 People Who Make America Great.” With her husband, she is founder of the PowHERful Foundation that helps young women get to and through college.

Alli Webb is an Entrepreneur, N.Y. Times Bestselling Author, and Founder of Drybar. After spending 15 years as a professional hair stylist, Webb left the hair industry in 2005 to start a family. A few years later, she began offering affordable in-home blowout services to mommy friends, which quickly expanded into a mobile operation by 2009. In 2010, Webb opened the first Drybar in Brentwood, CA. Eight years later, there are over 100 locations across the U.S. Webb also diversified the Drybar brand, creating a line of products and tools. Webb has been named one of the “100 Most Creative People in Business” by Fast Company, featured on Fortune’s  “40 Under 40” list, and Marie Claire’s “Most Fascinating Women.”Recently, Webb launched a podcast with her brother and business partner Michael Landau called “Raising the Bar” the latest extension of her ever-expanding empire. The weekly show provides a platform to budding entrepreneurs.

Carnie Wilson, daughter of legendary Beach Boy founder, Brian Wilson, has a varied career as a singer, songwriter, actress, voice over artist, author and talk show host. She currently is a regular guest co-host for CBS’S “The Talk” and has guest co-hosted “The View” and is Emmy-Award®-nominated for hosting “The Newlywed Game” and E!’s “100 Celebrity Slimdowns.” As a member of Wilson Phillips, Carnie achieved unparalleled first album success, selling ten million albums with three #1 hit singles, including the song “Hold On,” which was featured in her cameo role in the movie “Bridesmaids.” The group’s second album achieved international multiplatinum success selling three million albums. Carnie is the founder and co-owner of a national dessert company featuring delicious bite size desserts called “Love Bites by Carnie.”

The Miss America Organization, a 501(c) 4 non-profit corporation, awards millions of dollars in annual college scholarship assistance making it the largest scholarship program for women in the United States. MAO is comprised of 51 organizations, including all 50 states and the District of Columbia. MAO contestants contribute over 500,000 hours of community service annually and have raised over $16 million for Children’s Miracle Network Hospitals since 2007.

ABC Entertainment airs compelling programming across all day parts, including the No. 1 new drama on television, “The Good Doctor,” and the return of “American Idol”; in addition to upcoming new dramas “A Million Little Things” and “The Rookie,” starring Nathan Fillion; new comedies “The Kids Are Alright” and “Single Parents”; and the new prime-time talk show, “The Alec Baldwin Show.” The ABC Television Network is also home to the groundbreaking dramas “How to Get Away with Murder” and “Grey’s Anatomy”; the Emmy® Award-winning “Modern Family” and trailblazing comedy favorites “black-ish,” “American Housewife,” “Fresh Off the Boat,” “The Goldbergs,” “Speechless” and midseason breakout, “Splitting Up Together”; hit game shows “The $100,000 Pyramid,” “Celebrity Family Feud,” “Match Game” and “To Tell the Truth”; reality phenomenon “Shark Tank,” iconic “The Bachelor” franchise, long-running hits “Dancing with the Stars” and “America’s Funniest Home Videos”; “General Hospital,” which has aired for over 50 years on the network; and late-night talk show “Jimmy Kimmel Live!” The network also boasts some of television’s most prestigious awards shows, including “The Oscars®,” “The CMA Awards” and “The American Music Awards.” 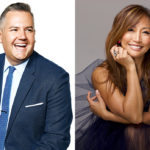